I’ve read a few passages about what has inspired some of the great novels.  Three famous horror novelists share a common thread: that their books were inspired by disturbing dreams.

Two years ago, I started writing a dystopian suspense novel called RIVER DAWN after a series of strange, recurring dreams set in an abandoned shore town.  In this town, the hotels are all empty, but reservation clerks are on duty waiting for vacationers that never show up.  I am there, with suitcase in hand.  Sometimes I am there with my wife and daughter, sometimes alone.  But we manage to secure a room for the night, and all night long, as we try to sleep, the ocean is pounding the shore with relentless fury. There is some comfort in being near the sea, but also a sense of impending doom.

For the book, I imagined a family on a journey in a future, flooded world where darkness reigns and the sea is always a force to be reckoned with.

But was it really inspiration in the traditional sense? According to one account, Mary Shelley’s FRANKENSTEIN was inspired by a strange, eerie dream involving corpses.  Nightmares also inspired Steven King with his novel MISERY and Robert Louis Stevenson’s classic horror novel DR. JEKYLL AND MR. HYDE. But it’s difficult to think of these famous authors having to find time to write in the midst of mundane schedules. Like most of the writers who venture forth into the universe of self-publishing, I struggle to find the time to write, and inspiration has to reveal itself rather quickly because I have to go run some errands, finish my tax return, take my daughter to school, walk the dog, mow the lawn, or keep a dentist’s appointment.

Perhaps we over-romanticize the writers we admire.  Robert Louis Stevenson spent much of his younger life in poor health, in bed and unable to participate in the normal pursuits.  Much of his early inspiration rose out of boredom.

Today, there are many thousands of part-time novelists; writers juggling jobs, family, and schedules.  What we end up with is the result of fleeting dreams that have to be captured and revealed quickly, between the challenges of everyday life.  I’d call it inspiration on the fly.

Stephen Graff is the author of the dystopian novel River Dawn, available now at Amazon. 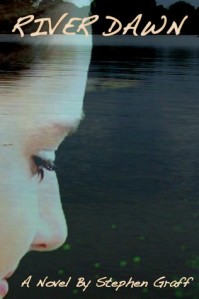 Stephen has been a teacher non-stop for 27 years, starting out in Philadelphia at a number of proprietary schools.  For the past 9 years, he’s worked as an elementary school teacher full-time, a musician/performer part-time, a free-lance writer and fledgling beekeeper in his spare time.  He lives in Woodbury, NJ with his wife and daughter. He is the author of the dystopian novel RIVER DAWN.