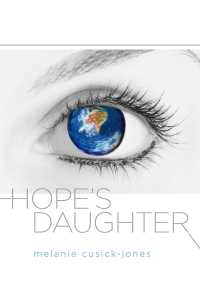 Life should be simple for Cassie.

For the small population of Earth survivors who live on the Space Station Hope everything they do is planned and scheduled, down to the cyclical food menus, their roles in the station, even how many children they have.

Despite rigid controls directing her life, Cassie feels more out of synch than ever and worries she won’t find a place for herself within the station community. Perhaps that’s because she’s hearing things inside her head that can’t possibly be real. Or maybe it’s the regular elopements of her peers, heading off to a romantic future in the Married Quarter of the space station, whilst she’s never even been attracted to a boy – no matter how hard her best friend Ami pushes them at her. Then there are the odd questions her work placement partner Balik keeps raising. His questions are just as troubling for her as his distracting smiles and eyes that seem to see inside her.

As Cassie draws closer to Balik she finds that everything else in her life begins to shift. He tells her things that call into question the system they live within. She can’t believe he is right, but at the same time she finds it hard to deny the sincerity of his ideas. Could there be a connection between Cassie’s problems and Balik’s questions? The truth will drag them both to a terrifying and deadly conclusion beyond anything they could have imagined.

Remember…you could win a copy of Hope’s Daughter in the main event giveaway, so make sure you’ve entered to win! Follow us on Facebook / Twitter and get vocal on the Indie Author Event comments to earn yourself additional entry points 🙂

Please answer each question in 10 words or less – that’s what makes it tough but fun! 🙂

Where do you find your inspiration? All types of people, books, life, films, family and love.

What is your favourite aspect of Hope’s Daughter? The complimentary relationship between Cassie and Balik – love conquers all…

Who is your favourite character from Hope’s Daughter and why? Cassie, because it is her story, her world, her life.

What are you working on now? Rainbow Maker’s Tale, which is Balik’s story and Outlanders.

What do you love about most about writing? Solving character’s problems – the freedom to go wherever you want

After graduating from The University of Sheffield with an English Literature Masters in 2003, Melanie has been writing fiction – time permitting – ever since.

The Ambrosia Sequence (started in 2008) and The Elementals (begun in 2004) are both ongoing, extended projects each containing several novels, aimed primarily at young adults and hover somewhere in the middle of sci-fi, futuristic and fantasy genres. Hope’s Daughter, released in December 2011, is her debut novel and the first of The Ambrosia Sequence, with the sequel – Outlanders – due in 2012.

When she’s not writing Melanie enjoys the wet weather of the north of England with her dogs or disappearing into a book for a few hours (no surprise there then). Unfortunately, all too often the ‘day job’ gets in the way of the nicer things in life!

Blog – http://melcj.wordpress.com and Aside from Writing!