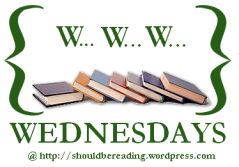 To Play Along:
Answer the following questions:
1)  What are you currently reading?
2)  What did you recently finish reading?
3)  What do you think you’ll read next?
My Answers:
1)  Currently, I’m reading Dreamwalker by Andrea Heltsley

From Goodreads: Noel Kennedy lost her boyfriend, her job and he dignity all in one week. Then something happened and she began to dream of this stranger she had never met. She couldn’t resist the man of her dreams named Jared especially when she met him in real life. Entranced, she slowly unraveled a world she was meant to stay out of. Her life was not what she thought it was once a sexy Boone stepped into the mix and shook things up. Can she escape a life of servitude or immortality for a chance at love?
2)  I actually have recently finished two books..  Saving Mary by Deidre Havrelock

From Goodreads: If you’re a fan of supernatural fiction then you will be captivated by this true story about a spiritually sensitive girl and the path that led to her possession. Part one of a two-part series, Saving Mary is the story of a modern-day Mary Magdalene—the woman from whom Jesus cast out seven demons.
Deidre Daily is drawn to anything seemingly spiritual, desperately seeking a spiritual existence. But inside this vibrant girl hides a terrified child who sincerely believes she has married the devil. Through a series of spiritual encounters her fear turns into reality, and she ends up possessed.
Deidre’s fascinating memoir relays her story from childhood to adolescence: invisible eyes leering at her from the corner of her bedroom, horrible nightmares tormenting her, and her desperate attempt to find God—only to end up possessed. It is a candid account of possession from a first-person perspective. This dark memoir brings to light an intricate world of deceitful spirits hell-bent on manipulating and damaging an innocent girl’s life, not only through her dreams, but also through seemingly every-day encounters.
Travel with Deidre into the mysterious world of spirits, ghosts and demons. Awaken yourself to a world that isn’t supposed to exist; a world that’s as intriguing as it is sinister. And then emerge as a new person—invigorated, aware and intent on living in the light. Saving Mary; Not just another story about a girl and her exorcist.
And, Pack of Lies by Staci Weber and Sara Dailey

From Goodreads: The last thing Allison Wright ever expected when she moved to Red Ridge, New Mexico was to come muzzle to muzzle with the wolf of her dreams.
Seventeen-year-old Allison Wright is convinced she’s losing her mind. Uncontrollable mood swings, hot flashes, and the urge to punch anyone who gets in her way are suddenly becoming everyday occurrences. Before her erratic behavior gets out of hand, Allison’s mother finally comes clean about her dark secret. Mom is a werewolf, and soon Allison and her brother Aiden will suffer the same fate. When Allison reaches her breaking point, the family leaves their life in Texas to move to Red Ridge, New Mexico where they rejoin the pack that Allison’s mother left behind almost 20 years ago.
Unfortunately, not everyone in Red Ridge is thrilled about Allison’s arrival, especially when she attracts the attention of the very handsome, very taken, soon-to-be alpha, Cade Walker. Little does Allison know, her mere presence is causing a rift in a once unified pack. Not only has Cade been forbidden from being with Allison by his father, the pack’s alpha, Cade’s girlfriend, Kendall Stuart, will stop at nothing to get Allison out of the picture. Well on her way to becoming the next alpha’s mate, Kendall expects to rule the pack by Cade’s side even if it means teaming up with a rogue werewolf with an agenda of his own. Determined to get rid of Allison permanently, when Kendall and the rogue join forces, all hell breaks loose and no one in the pack is safe, especially not Cade and his true mate.
3)  There are several books on my next to read list!
Hidden by Sophie Jordan (squee!!)

From Amazon: Readers will be clamoring to find out who Jacinda chooses in Hidden, the final installment of the steamy Firelight novels. Is it Will, the hunter she’s risked everything to save, or Cassian, the prince of her kind with whom she has an undeniable connection? Loyalties are tested and sacrifices made in this epic tale that will appeal to fans of Maggie Stiefvater, Lauren Kate, Aprilynne Pike, and Colleen Houck. When Jacinda and Will’s forbidden romance leads to the capture of Cassian’s sister, Jacinda knows she must set things right. With her friends by her side, Jacinda hatches a daring plan to rescue Cassian’s sister. But the only way to reach her is for Jacinda to become a prisoner herself…and there’s no guarantee she’ll make it out alive.
I am soo very excited about this book!!  It’s in the mail to me as we speak, hopefully it will be in my mailbox today!!  Yay!!

After this, I will be reading My Fearful Symmetry and Servant of the Goddess, by Denise Verrico..

These are books 3 and 4 of the Immoryl Revolution series..
The descriptions can be found on Goodreads,here and here.

Happy reading everyone!  I hope you all enjoy the books you’re reading this week!

One thought on “W…W…W… Wednesday”