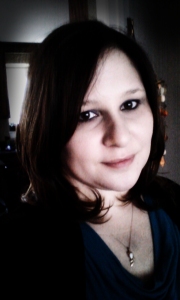 Kelly Walker is a full time novelist, wife, and an all the time dreamer. Her first promotion was 8 years ago and it came with the job title of ‘Mom’. Her second promotion came with no raise in pay but a huge jump in responsibility when she became ‘Mom of two’. It’s a rewarding career but the retirement plan sucks. She is a huge advocate of animal rescue and adoption and shares her Virginia home (and couch) with three dogs and two cats.

If you could travel in a time machine would you go back to the past or into the future? The past. I’d much rather chose to go back, where at least I kind of know what to expect. The future is so uncertain and so unknown, and it scares me. It scares me for my children, and their children because I don’t know what type of world they are going to live in.

Any other books in the works? What are your goals for future projects?  Oh goodness, lots. Cornerstone is the first in a trilogy, and that only takes into account the main books of the story. Second Stone will be out in February of 2013. Broken Stone will hopefully follow in April of 2013. In addition to the three main books of the story, I’ve got a prequel planned that will tell the story of Emariya’s parents and their love and personal sacrifices. I’d like to do a few novellas as well-In particular I know I need to write the history of The Split. It’s pretty fascinating and adds an entire extra layer of richness to the world. Rink may find himself in a short story, too. And then, I have a few non Souls of the Stones related stories in my head. One will be an adult drama, the other will be a YA paranormal.

If you could jump into the pages of a book, and live in that world.. which would it be? Harry Potter. As long as I didn’t have to be a Muggle.

What is your dream cast for your book? Definitely Taylor Swift for Emariya. I just cannot picture anyone better for the role. For Torian – Probably Ian Somerhalder. Christopher Gorham could work as well though. I actually have a pinterest board that shows my ideal looks for each, as well as some of the world. I don’t know who all these people are though! One thing that really surprised me is that the actor who played Voldemort would be a perfect Oren. http://pinterest.com/dreamersmagic/cornerstone/

What was your favorite book when you were a child? I read as often as I breathed as a child. The first book I really remember reading was The Big Black Horse -http://www.amazon.com/gp/search?index=books&linkCode=qs&keywords=0375840354  It’s a younger child’s version of The Black Stallion. As I grew up, I still loved reading about horses and I eventually read the actual Black Stallion series. By the time I was a teen, I think my favorite book was The True Confessions of Charlotte Doyle. I loved what it said about breaking expectations.

Is there a song you could list as the theme song for your book or any of your characters? Taylor Swift – Eyes Open – The mood of it, and even many of the lyrics really fit Cornerstone.

What’s one piece of advice you would give aspiring authors? Just do it. Don’t waste time telling yourself that you can’t or shouldn’t or couldn’t. But, get help, get feedback and get advice from people who don’t know you. I run my writing through an online critique group (Critique Circle) and it is absolutely the most valuable thing a writer can do for themselves, their career and their self esteem. Yes, it may hurt when you realize you aren’t where you want to be, but the thrill of seeing yourself improve is worth it. Plus it helps build a great support network, which we need. Writing is a solitary profession, it’s great to have company.

If you could choose only one time period and place to live, when and where would you live and why? Early Scotland. I’ve never been but pictures tell me it is beautiful. I think the people there/then had a lot of pride in their families, their heritage and their way of life. I think that is a good thing. Even though in some ways life then was harder, I think it was also simpler.

What is your favorite Quote? My favorite quote from a book is “Be Safe.” I think those two little words say so much, and I love the way it was delivered.

How did you know you should become an author? I’m still not so sure on the should part, but I don’t think I had any other choice. My main character, Emariya(Riya) lived in my head for three years, determined to get out. She really would not take no for an answer. So I wrote her story, or I’ve started to anyway. There is much more to tell.

Who are your favorite authors of all time? Stephanie Meyers – She created a book that will stick with me forever. Twilight and I are old pals. I re-read it each time my husband was deployed, and it was something that really got me through. Her characters are so memorable, and I really don’t know what it is, but they are. They just kind of stick with you. James Patterson – I’ve been reading his Cross series since I was a teen. I still love it. Elle Casey is a new favorite. She’s awesome and I love her kick-butt heroines. Diana Gabaldon – I love her Outlander series. Her words never cease to amaze me.

Can you see yourself in any of your characters? I think I’m more Jessa than Emariya.

What movie and/or book are you looking forward to this year? Breaking Dawn. Is it here yet?

What do you do in your free time? I write in my free time. Being a Mom is my first job.

If someone wrote a book about your life, what would the title be? Constantly Dreaming, Occasionally Achieving

What’s your favorite season? My favorite is fall. I love the plethora of colors, the refreshingly cooler weather, and pumpkins and apple cinnamon brooms! My husband was stationed in Arizona for four years and after being an east coast girl my entire life, spending four years with two seasons ( Hot and Hotter) and no real change to the landscape, I was thrilled to come home to the east coast and enjoy having seasons again. Each time the season changes I get a little thrill of excitement, but Fall is definitely my favorite of them all.