Words are the stock and trade of every writer, but some authors get too caught up in their own words. When you’re writing out a scene involving any sort of character action at all — even when it’s talking — you also have to work out the logistics. If you can’t put yourself inside of every scene and picture exactly what’s happening, you’ve got a real problem. 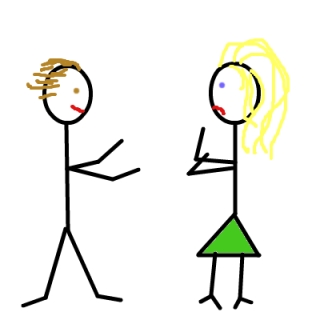 Get Back Inside the Box

The environment the characters live in is just as important as the characters themselves. Your characters are only extraordinary or special when compared to everything else around them. How they move is just as relevant as how they think. That’s why you’ve got to think about your books three-dimensionally, not just the way they read on the page.
Just about every room in the world is shaped like a box. Some boxes are bigger than others, some substantially so. Some are elongated so they’re more rectangular in shape. Some are enclosed with walls made of plaster, others with windows of glass. Put yourself inside a room with your characters. In that room, you’re the only thing that doesn’t take up space.
Envision each scene as you write them, and see yourself and your characters inside that box together. In most cases they will be standard human beings who must stand upon the ground, so remember that. Is there also furniture in this room? Maybe they’re going to have to move around it to get to one side of the room or the other. Are there other people in this room? Where are they standing? What needs to happen so that the characters may complete the actions the scene requires?
You’ve always got to think about their actions. If you have two characters who are supposed to be talking at a party, don’t have them standing and shouting across the room at each other. Don’t allow me to picture it playing out this way. Explain to me where they’re at in relation to the rest of the party. Are they in a corner, by a window? By the buffet table, off to the side? Maybe they stepped out onto the balcony, or into a back room.
If you can’t picture it as it’s happening, you’ve got to change the scene until you canpicture it. That’s the only way I’m going to be able to picture it as the reader, and I want to picture every single scene.

This post originally featured on Jade Varden’s author blog in 2012.

Author Jade Varden is a regular guest contributor on Aside From Writing. The Writing 101 features originate from her own blog  at http://jadevarden.blogspot.co.uk where you can see more of her thoughts on writing, as well as her own books. Her debut novel Justice and sequel The Tower are available now! Read our review of Justice here.