About the Author: Tony Talbot was born in the 1970s and started writing in 2008 after a dream he had and couldn’t shake. Eight Mile Island is his fourth book. Tony regularly contributes to the Aside from Writing blog and so look out for future features and posts from this great author. 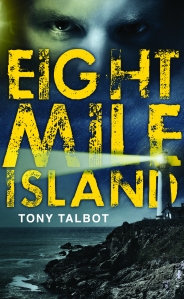 Dylan James is used to boarding schools. He’s been thrown out of so many in the past two years, he’s lost count. So when an elite academy in Oregon offers him a place, he doesn’t think he’ll be there more than a week.
But Eight Mile Island isn’t like anywhere Dylan has been before. In the dense forests around the school, there are things that look human but aren’t.
Things that are hungry, and waiting.
But that’s just the start of the mysteries, mysteries that mean Dylan may never escape. Even if he wants to…

4 thoughts on “IAM Book of the Day…Eight Mile Island”