One of our favourite YA books in 2012 was Amy Martin’s debut, In Your Dreams. Today she joins us for a feature on the sequel As You Wake, which is out now! You can check out an exclusive excerpt right here, and enter our grand prize competition to bag a copy of your own! 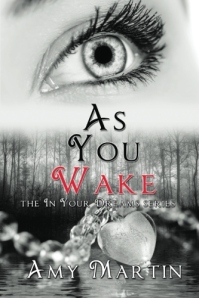 Zara “Zip” McKee and Kieran Lanier thought they had put the threats from Kieran’s past behind them in the first installment of the In Your Dreams series. But when danger comes for them once again, Zip, Kieran, and their families find themselves on separate summer road trips that none of them had anticipated. When all paths converge in North Carolina, the two families are forced to deal with each other and the secrets they’ve kept out of love and fear.

But Kieran is keeping the biggest secret of all from everyone but Zip. He hasn’t had a dream—about the future, about anything—for months. And while Zip and Kieran are grappling with what the new twist in Kieran’s sleeping disorder might mean, a mysterious stranger reveals information that could change Kieran’s life–or end it.

Excerpt from As You Wake:

I grab the section of chain link fence that’s rusted away from the pole and hold it aside just enough for Kieran to crawl through to the grassy area under the press box. As I follow him, the fence snaps back into place, scraping my skin through my shirt.
“You okay?” Kieran asks after he turns just in time to see the fence smack against me. He helps me to my feet, and I lean back against one of the metal pillars hidden away in the shadows.
“Yeah. I’m good,” I assure him before changing the subject. “You probably shouldn’t have rushed through your chem final.”
His arms circle my waist, strands of hair falling into his face as he looks down at me. “It was worth it,” he whispers, the smile I give him quickly swallowed by a wave of kisses. My hands wander up underneath his plain white t-shirt, my thumbs grazing the base of his rib cage on either side. Once we finally come up for air, my head foggy and my fingers nearly stuck to his skin with sweat, Kieran takes my face in his hands and looks at me dead on. “I love you,” he says, my ears ringing on hearing him say those words to me for the first time. “I couldn’t let you leave for Chicago without telling you that.”
I don’t hesitate. “I love you, too.”
“And I’m not just saying it because we’re going to be apart for a while,” he goes on, and I hold myself back from saying Or forever in my head or out loud. “I’m saying it because I’ve known all along.” He must see the question in my eyes, because he continues with “But not because I dreamed something beforehand. I’m talking about after we met…I just…I’ve always known somehow. And I kept telling myself, ‘Kieran, you need to stop being such a wimp and tell her. If she doesn’t say it back, then she doesn’t say it back, but at least you’ve told her—‘”
“You’re babbling,” I point out, and he gives me the goofy grin that endeared him to me the day we met.
“Yeah. Little nervous, I guess.”
I put my hand to his cheek. “Don’t be. I love you, Kieran.” My mouth enjoys saying the words, words I’ve never said to anyone outside my family. “I love you. I’ll say it as many times as you need to hear it, because it’s the truth.”

He doesn’t make me say it again. We merge once more, the now-familiar ache of desire in my stomach and the early afternoon heat building up under the press box conspiring to make me weak. I just want to lie down with him in the scrubby grass so we can kiss until all thoughts of Frank Dozier or anything else become a distant memory, but after a few minutes, Kieran pulls away, my lips straining to stay on his.

Amy Martin wrote and illustrated her first book at the age of ten and gave it to her fourth grade teacher, who hopefully lost it in her house somewhere and didn’t share it with anyone else. Not counting that early experiment in self-publishing, In Your Dreams is Amy Martin’s first Young Adult novel.

A native of St. Charles, MO, Amy currently lives in Lexington, KY with her husband and a ferocious attack tabby named Cleo. When not writing or reading, she can usually be found watching sports, drinking coffee, or indulging her crippling Twitter habit (and, sometimes, doing all three at once). You can follow her on Twitter at @ThatAmyMartin.

You can read our 2012 review of In Your Dreams here and an interview with Amy here.