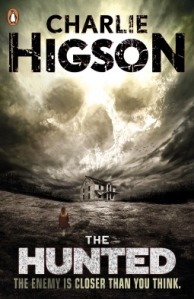 Everyone over the age of fourteen has been turned into a flesh-craving monster, with a taste for teenage meat…The kids that are left are fighting to survive.

Book six of seven. I reviewed Book five here, and went straight on to The Hunted.

In terms of pacing, as a comparison, it took me four days to read the four hundred and fifty pages; it took me a fortnight to read The Fallen (the previous book), which is about the same thickness. What was missing there came back here; the characters are pushing forward even when there’s not much happening.

Higson moves the action out of London entirely for this one, into the countryside west of London. It’s no less dangerous though… Small Sam’s sister Ella and her protectors make a break for the countryside. No spoilers, but it doesn’t end well for some of them.

Ed and some fighters go and look for her to bring her back to London, meeting new groups of kids – some friends and some enemies – on the way. There’s also a group of adults, untouched, who have secrets to tell…

There’s a drawing together here, a tying of loose ends that started five books back with characters you thought were long gone. There are ends tied up here that I didn’t even realise were loose, and Higson is clever and subtle in the way he weaves them back into the storyline. Coming out of it are new plot lines for the final book.

The final battle is about to begin…

This is book five in a seven series set. Luckily, I’m reading them back-to-back which helps a lot. There’s no way I’d remember all these intertwining stories with a long gap between them. There are a lot of characters floating around London…

The focus this time is on a group at the Natural History Museum. There’s an infected kid hiding and hunting them, and a second group sets out on a trip to where the disease affecting the adults started, stumbling across a group calling themselves the ‘Twisted Kids’, a teratogenic bunch with odd abilities.

As though sensing that the endless killing of diseased adults is getting a little repetitive after five books (And it is), Higson keeps the death count down and spreads his wings a little, digging into the characters more, exploring their relationships and friendships.

Because of that, this is a slower and more thoughtful read than the other books. The pacing slips a little though, and this feels like it could have been shorter by about twenty pages.

Towards the end, the pacing picks up again when Small Sam re-appears. There’s a monster of a cliff-hanger with his sister Ella, but no spoilers as to what’s going on. I’m glad I don’t have to wait a year for the follow-up though.

As usual, the geography and the world is flawless and the characters (the ones he develops, that is: The rest are sometimes merely second-spear-carrier-on-the-left material) are well thought out.

It felt like a long walk to those closing chapters, but I’m here for the long haul right the way to book seven…Book six is coming next month!

Everyone over the age of 14 has been consumed by a virus that essentially turns them into zombies. Only the children are immune…for now, maybe.

This is number four in what Charlie Higson is now planning to make a seven book epic, and there’s a sense of things being set up for the later books, especially in the later chapters. There’s a change in the behaviour of the adults, for good and bad – the good guys get an ally, and the bad guys get a leader.

This is a book without fault. There isn’t a single wasted character or event, no matter how minor, and all the strands of plot tie up at the end and then leave room for more books (apart from DogNut, who I’m sure will appear in Book Five or somewhere down the line…).

What’s getting hard after four books and a gap of a few years between them, is to get the timeline sorted out. Events in this book overlap events in the other three, and it’s hard to remember who all the characters are in the previous books and their ‘status’ in this one. But that’s a minor niggle.

Higson goes to lengths to point out that the monsters inside – the children who decide to lead the children – are as dangerous as those outside. There are shades of Lord of The Flies in Ed and Little Sam and the situations they find themselves in, and I think the comparison is a worthy one.

This is not a book for the squeamish. A nine year old boy gets flogged, anyone can die (and they do), and the fights against the adults are long, bloody and vicious. It doesn’t go into extravagant details, but it doesn’t shy away from them either. Be warned: This is the book Stephen King would write if he wrote YA.

The real star of the show are Little Sam and the delightfully batty (or is he?) The Kid, who talks like Alex from A Clockwork Orange but is sharp as a sat-on-box-of-pins. Sam’s grim determination to find his sister and then The Kid is one of the underlying themes of the book – and there are so many: dictatorships, loyalty, sacrifice, friendship, not judging people by their appearances, rebuilding society. Everything is packed in there, but nothing feels rushed or thrown in. This is a book carefully constructed to make you think and reconsider, and I’m already hungry for the next three sequels.