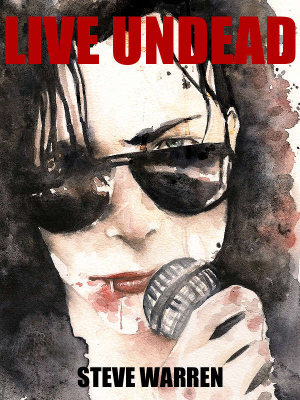 Synopsis: The first installment of the Undead Chronicles.

Live Undead tour the country, bringing their blood-slicked shock rock to out of the way dives and underground clubs. Their obsessed fans follow them from city to city, unaware of the band’s horrifying secret. The lacerated throats and acts of self-mutilation isn’t simply makeup and effects – it’s all real. The members of Live Undead are vampires. They prey on the black-clad, disaffected, and depressed teenagers who flock to their shows, while leaving a trail of dead bodies in their wake.

Depressed, sexually confused, and bullied at school, Nothing desperately longs for escape. He dreams of rock and roll stardom and thousands of adoring fans, but will settle with knowing what it’s like to be special. That’s the question he needs answered when he finally gets his chance to meet Live Undead.

Eric’s life has been in a downward spiral ever since his pregnant girlfriend went missing thirteen years ago after a concert. When Eric stumbles across Live Undead, he’s shocked by their uncanny resemblance to the band that had played the night his life changed forever.

Thoughts: 133 pages. While not for everyone, this book was fairly easy to digest in terms of writing style. It took me two days to read.

Review: Live undead will not be a book mainstream book readers will read, it has far too much death metal, hard rock and gore in it, but there will be a loyal group where it will make its mark.

Akin to the cult following of the band ‘Live Undead’, the book too will likely find a niche with the horror/gore fans. I must admit, however that while I am no horror/gore enthusiast, I didn’t find this book to be overly offensive. Perhaps it is that through the reality of today’s society that we are becoming desensitised to this subject, but while definitely in the gore realm, it wasn’t truly in your face.

There is a lot of sexual violence, blood, fetishism and murder among other things, so if these areas bother you, don’t pick this one up!

I think even more-so others will be put off by the large amount of gay sex in this book. This too could be another area for potential fans, I am sure there is a group of M/M fetish/horror/gore fans out there.

Add to this wicked little tale a dark undercurrent of paranormal themes, including the non-sparkly vampires, a very heavy dose of hardcore music exposure, and you have yourself a tidy read. (Blood and guts aside of course).

The writing is clear, the plot reasonably well developed and a few twists thrown in to keep you guessing, the ending is a bit of a let down, but I feel there will be a continuation down the track that will probably fix that. I personally would have stopped after the mention of Hollywood.

If you want a comparison for this book, think Marilyn Manson meets a twisted Twilight meets an episode of Law and Order. Give it a try!

*NOTE: The author provided me with an electronic copy of the book in return for an honest review*

Have you ever read any books dripping with blood? Why or why not? Let us know in the comments below. Hope you’ve enjoyed today’s Horrorfest review, here’s a little more about the author, Lynxie, who blogs at Coffee2words…

Coffee2words is me at my most basic in terms of my writing. I drink copious amounts of the darkly, rich stuff and attempt to convert it into at least partially amusing or interesting written word. I am sure those of you who check back here from time to time will see various spatterings of my work adorn the pages of my blog.

In other aspects of life, I enjoy reading, reviewing the books I read and interacting with the over 10 Million members on goodreads. I have spent a great deal of my life with my nose shoved between the pages of a book, and more recently pressed against the screen of my kindle. On a good week, I read between 1-4 books and I endeavour to review each of them. Reviewing is still quite new to me, having only picked up my quill late in 2011, I am still finding my own style.

When I’m not writing, reading or stuffing my husband’s or my own face with food, you can find me out walking my beautiful Border Collie dog, Tammy, frequenting the gym or sewing up a storm in my sewing room.

Thanks for taking part in our Horrorfest Lynxie 🙂