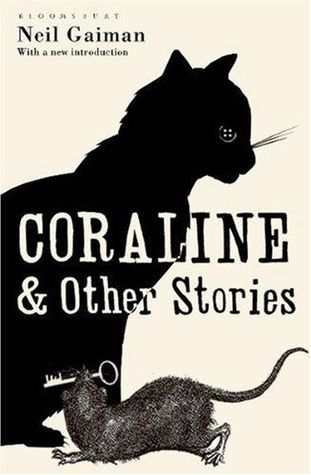 My first dip into the Gaiman universe was an enjoyable experience. Like a day at the beach – sometimes the wind will drop and the vista of the sea before you will open out to infinity. You’ll settle into your chair of choice and sigh, contented. The next minute, the wind will be kicking sand into your eyes and the sun will be shooting shard of lights into your eyes from the choppy ocean.

Gaiman is like that. When he’s good (which is most of the time), he’s excellent, with a wry and humorous turn of phrase, a delicate touch of wit. When he’s bad, he’s mediocre, and doesn’t do a lot for you. You shift in your seat and push on, hoping he’s going to get better again.

This was a collection of ten stories and one blank verse…

Coraline, the header of the book. An old-fashioned fairy tale, with an old-fashioned witch and a feisty heroine. Nothing new here, not really, but Gaiman spins the tale with a deft wit into an exciting and at times frightening tale. To be honest, I was more scared by Coraline’s parents’ indifference than by her Other Mother. Great bedtime story for kids though.

The Case of Four and Twenty Blackbirds This is an absolute hoot, a riot of a tale. A hard-boiled detective working the nursery rhyme beat, full of characters like Little Jack Horner and Humpty Dumpty, aka The Fat Man. Just brilliant, and I guffawed and chortled my way through it. One to read aloud, detective voice included.

Don’t ask Jack The weakest and shortest story in the collection, about a malevolent toy abandoned in a toy box. Such little happens that it wasn’t worth the effort.

Troll bridge A spin on the tales of trolls that live under bridges, but more about the boy (and later man) who discovers it. Since he’s a jerk, we don’t really care if the troll catches him or not; and since he’s a jerk, the story didn’t do much for me.

How to sell the Ponti bridge The oldest scam in the book – selling something that isn’t yours. A twist at the end, but it isn’t a particularly good twist, and doesn’t lift the story above average.

October in the chair A homage to Ray Bradbury, full of strange imagery and twisting sentences. The story itself is quite weak, but the frame around the story is nice, full of seasonal atmosphere and wit.

Chivalry Another hoot of a tale. An old lady finds The Holy Grail, and refuses to part with it, even when a knight makes her better and better offers. Wonderful tale, especially the little epilogue.

The Price A family takes in stray cats, and one of them repays them. Interesting story; what was refreshing was how genre-savvy the character was. He locks the cat in the basement, and his life starts to go wrong. He releases it, and his life improves. He’s smart enough (for a change for a literary character) to realise what’s going on.

How to talk to girls at parties Thinking about this one again, I see where Gaiman was going with it. Talking to girls when you’re a teenager is like talking to strange aliens who make no sense. In fact, I think it still is.

Sunbird Strong characters let down by an average story and so-so ending.

The witch’s headstone A boy – who might or might not be dead – can see the dead and interact with them. He decides to buy a witch a headstone as a favour. Too easily resolved, this could have been stretched a little more and the characters given more depth to make it more satisfying.

Instructions A blank verse poem about going on a quest, with some cool imagery. Falls apart at the end though, like Gaiman didn’t know what to do with it.

So, in the end, what do I think of my first dip into Gaiman? I liked the way he developed his characters, and his world building – sometimes in a phrase or two – was brilliant. His characters are very genre-savvy, which is energising. When the boy in “October in the Chair” meets another boy in a graveyard, he knows (as we almost instantly do) that the boy is a ghost; as when the man in “The Price” who finds that a stray cat is protecting his family when he locks it into the cellar and his life begins to break.
His endings seemed the weakest part of his writing. He seems to be aiming for twists in some of his stories, but they were laboured and obvious.

However, I think I’ll be back for more Gaiman. I’m intrigued enough to continue reading!