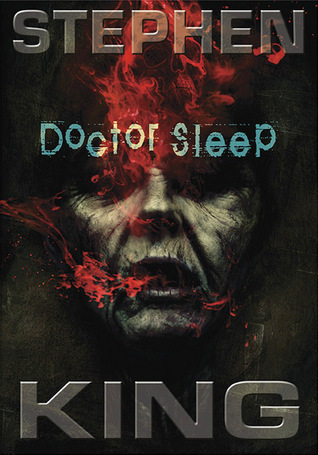 Dan Torrance, the child protagonist of King’s The Shining, is now an alcoholic drifter, chased by the ghosts of his childhood and trying to drown them in drink. When he gets off a bus to nowhere in New Hampshire, his life begins to change…

Including The Talisman – Black House books King wrote with Peter Straub and his Dark Tower series, King is actually an old hand at sequels. This one doesn’t disappoint: it’s full of warmth and humour and characteristic King touches and style.

About a quarter of the way through, I realised the plot is more of a Dean Koontz feel: Troubled man helps protect precocious tele-everything teen from very real psychic vampires, learning the redemptive power of family on the way. Not that’s a criticism at all, I just thought it was interesting.

Dan attends Alcoholics Anonymous, and one of the twelve steps is apologise to those you’ve hurt…and it seems like King wants to apologise to Dan Torrance for running him through the hell of The Shining. He wants to know that Dan’s life turned out all right in the end. It’s very much a story of redemption and returning sanity, a counterpoint to the damnation and slide into insanity that was The Shining.

And King’s own demons mirror the book: As a recovering alcoholic and substance abuser, he’s been at the bottom where Dan starts off. As a result Dan feels like a very intimate and personal portrait, a thin veil of King’s own fall and recovery.

The climax felt a little rushed, but then as a book about redemption and healing, it was never really about who was going to win in the end. And, to be honest, it was pretty obvious from the start.

It’s been a while since King wrote anything as simple as splatter and gore, and the horror and the terror in this book are restrained and off-screen. No one loses a foot or does the Mashed Potato all over a giant eyeball for instance.

With such a strong young adult protagonist, it’s also a great young-adult book.

I haven’t read The Shining in a few years, and it didn’t feel as if I needed a refresher to read this. There would have been a few paragraphs that wouldn’t have made much sense, that was all.

If you haven’t read any King, this is a good place to start.